Whether you are new to gaming or have been gaming for ages, you’ve probably heard of the Spiel des Jahres Award. It is awarded to games of “outstanding quality” that promote gaming as a valuable family pastime and appeal to a large audience. There are two other awards, the Kinderpsiel (for children’s games) and the Kennerspiel (for more “experienced” gamers). Winning any of these awards comes with its own distinction, with the Spiel des Jahres being the most prestigious. Given that the 2015 winners were just announced, I thought it might be interesting to take a closer look at these awards, the games that won them, and the designers who designed them.

What is the point of each award?

Kinderspiel – “to give guidance to families with children as well as educators and to draw attention to excellent games for children”; The focus of this award is on games intended for children up to the age of 8, but it also includes games that can be played with other family members.

How are games selected?

Spiel des Jahres – The jury considers all new family and adult games published in Germany in the current and previous calendar year. There are two phases: an information gathering phase and an initial evaluation phase. After both phases are finished, the jury meets to create a list of candidates. From this list, three nominees are selected from the main award.

Kinderspiel – Identical to the Spiel des Jahres process, only focusing on children’s games.

Who determines the winners?

Spiel des Jahres – The jury consists solely of journalists who specialize in game reviews, have worked for extended periods for newspapers, magazines, and broadcast organizations.

Kinderspiel – Three members of the Spiel des Jahres association and three-member advisory committee. Advisors are journalists specializing in children’s media and are appointed for one year.

Kennerspiel – The same jury as the Spiel des Jahres.

In all cases, no one involved in any way with the publishing or sales of games is allowed a seat in the jury.

How are games judged?

For all three awards, the games are judged on the following aspects:

What does the award do?

Well, it’s basically bragging rights. There is no monetary value attached directly to the award. However, winning the awards will likely increase the sales of a game significantly. I’ve heard that winning the Spiel des Jahres can boost sales from 3000 to 300,000.

Just in this small sample size, you can see that some names repeat. Because my brain likes to look for patterns, I decided to look at awards by designer.

The designer who makes the most appearances on the list is Wolfgang Kramer with a total of 5. However, he shows up as both solo and with different designers. Klaus Teuber has 4 appearances as just himself. 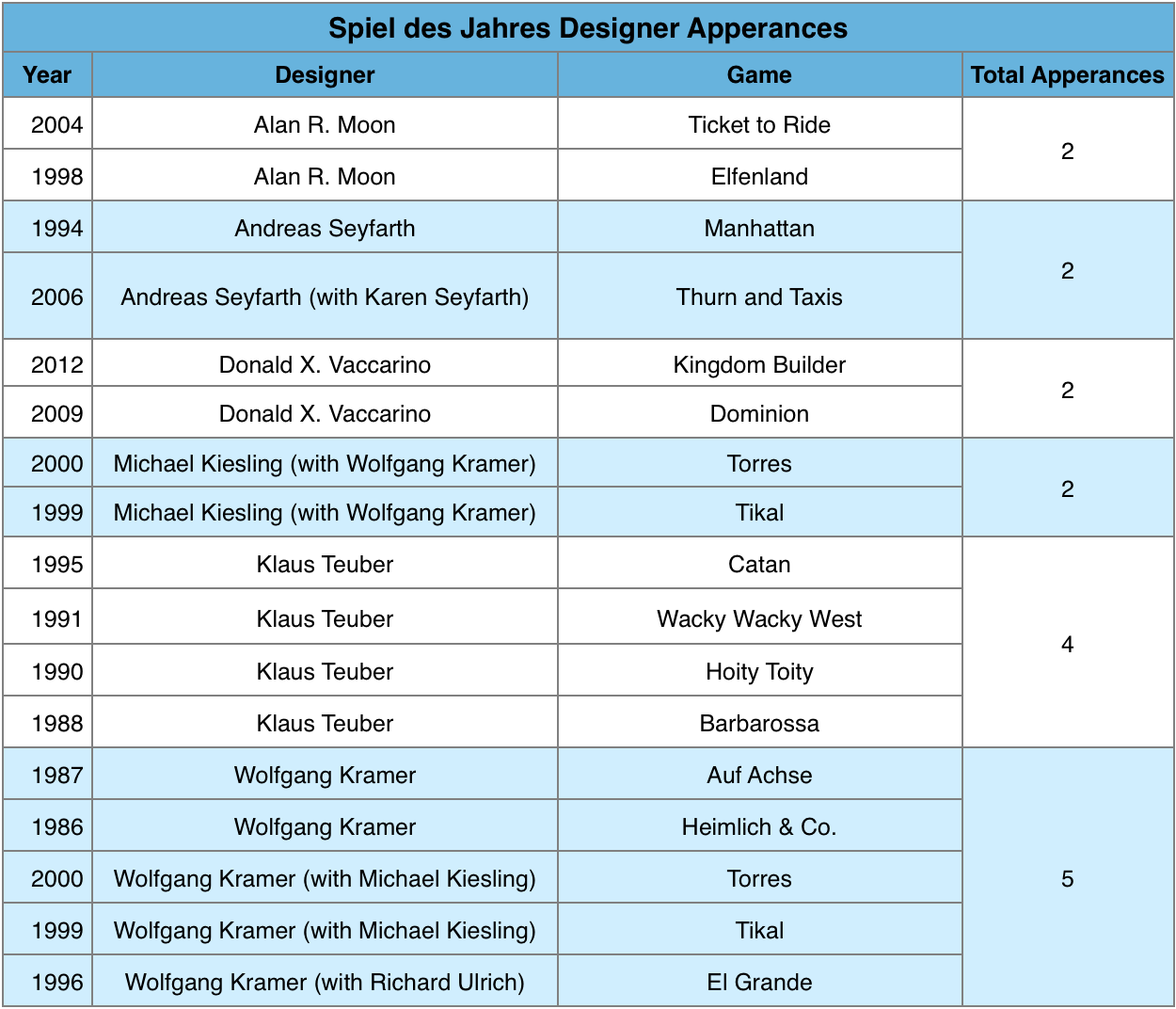 As you can see, the Kinderspiel distribution is fairly even across the board. You can see a complete list of winners here. 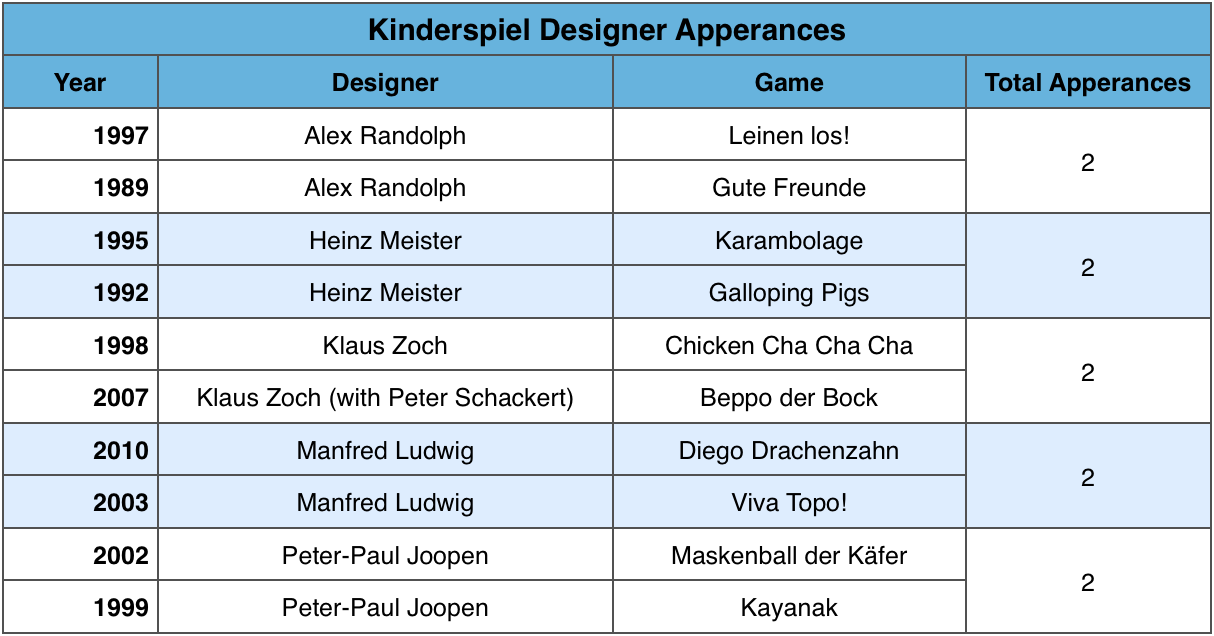 Since it’s start in the 2011, the Kennerspiel has not had any duplicate winners. You can see a full list of winners here.

There are a few designers who have won awards across genres.

* These numbers were probably not pulled in the most scientific of ways. To get them, I looked at the names of the winners and marked them as either male or female. If a person won more than once, I did not count them additional times.

A quick note about numbers. Numbers can say whatever you want them to say. A quick glance at these charts, and it’s obvious there are less women who have won an award than men who have. However, as I don’t have this information easily available to me, I can’t determine the amount of women designers to women designers who win ratio. What I mean to say is, if 30 women are designing and 12 of them have won awards, that’s pretty good. I have no way to track that though. Hopefully, if nothing else, you to reflected a moment on the role of women in the gaming industry.

What does all this mean?

You tell me. Some people swear by awards. Some people couldn’t care less. I’m somewhere in between. Because I only had a fleeting understanding of what the awards meant (Game of the Year, Best Kid’s Game of the Year, Some Other Game of the Year), I thought it would be interesting to provide a bit more background and random bits of information about the Spiel des Jahres Award and its siblings, the Kinderspiel and the Kennerspiel.

I can’t even begin to imagine having to vet all the games that come out in a year. I’d like to play as many as I can, sure. But to have to come up with a “best of” for an entire industry? No thanks. I’ll leave it to the professionals and continue to play whatever I want anyway.

If you happened to check out the lists of previous winners, what do you think about them? Do you tend to agree with the awards or not? What about this year’s winners?