There is usually a healthy amount of discussion that occurs at a game table. You’re there with your friends. You’re playing games and having a good time. But what happens when games force you to talk about the game and how it’s being played? Here’s a list of games that turn trash talk into table talk (and hopefully don’t ruin any friendships along the way).

Spies try to outmaneuver Resistance Operatives in The Resistance in an effort to maintain the Empire’s domination. Each round, players approve teams to go on missions, but Spies may sabotage a mission if they manage to make it onto a team. If enough missions succeed, the Operatives win. However, if too many fail or if the Resistance succumbs to paranoia, the Spies will have foiled the Resistance! 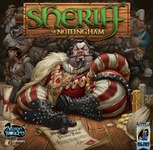 Players try to smuggle goods into Nottingham in the Sheriff of Nottingham. Each turn, one player assumes the role of the Sheriff, and the others try to lie, cheat, and bribe their way into the city. You can look the other way for a tidy fee, but then another player might cash in some lucrative contraband.

One Night Ultimate Werewolf is a fast-paced social deduction game where everyone gets a role, and no one gets eliminated. Each player has a unique ability they need to maximize if they hope to find the werewolves among them. Surely, someone must be guilty! (Maybe it’s you.)

Bohnanza is a set collection game where players trade and harvest a wide assortment of beans. Because cards have to be played in the order of their appearance in a player’s hand, there is an extensive amount of negotiation that happens in an effort to secure much needed beans while pawning off unwanted ones. Wheel and deal, so you can end up with the most lucrative harvests of adorable beans! 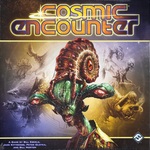 Negotiation and bluffing are key to winning Cosmic Encounter. Empty promises and backstabbing abound as players fight to control the universe, with a little help from their unwitting friends. Will you join the attacker for a chance at colonizing another world, or can you help the defender for the chance at some useful resources? In either case, the whims of Destiny make sure that all alliances are short-lived, because your former allies may be sent to your doorstep next. Utilize your unique alien powers wisely, and you might be the one to rule!

How do you feel about games of negotiation and social maneuvering? We’ve seen an explosion of these types of games recently, especially in lighter fare, but there’s a grand tradition of metagame politics in many classics. Which other games in the genre delight you or fill you with dread? Most importantly, how can we use this information against you in a future game?