When people think about games that play well with six or more players, they often think of party games. While party games are lots of fun, there are plenty of games that offer more choice than which position to stand in or which word to guess. Today, we’re talking about heavy games that play best with six people.

Dominant Species is an area control game of survival of the fittest. As one of six animal types – mammal, avian, reptile, amphibian, arachnid, or insect – players place workers and lay tiles to expand their species and the environment in which they will flourish while systematically wiping out their opponents’ ability to exist and thrive. Achieve domination of the environment, evolve your species, and stay one step ahead of the glaciers to defeat all challengers.

Twilight Imperium is an empire-building game of epic proportions. Players trade, wage war, and advance technology on their quest for interstellar supremacy. Explore new worlds and amass your fleets, but don’t wait too long to make your move. It is time to claim the imperial world as your own!

Here I Stand is a war game set during the Reformation in Europe. A card-driven negotiation game, players make secret deals to create both political and religious conflict in an effort to secure their power’s victory over the rest of the empire.

A sequel to Here I Stand, Virgin Queen covers the main conflicts within Europe during the reigns of Elizabeth I and Philip II. Using the same card-driven system as Here I Stand, the Virgin Queen adds several new mechanisms that reflect the changing nature of the political scene. 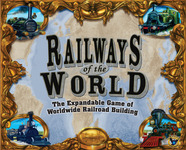 Railways of the World

Formerly known as Railroad Tycoon, players of Railways of the World take on the role of railroad barons fighting to build the fastest locomotives to ship goods along the longest routes. Pick up and deliver goods, grow your empire, and become the greatest tycoon of them all! Just don’t let the other players get there first.

Eclipse is a 4X game set in a galaxy where peace is coming to an end. Players explore new territories, research technology, expand their economies, and design unique spacecraft to help them rule the galaxy. Defeat remnants of the Ancients to gain access to their discoveries and exploit the resources beyond. Use your race’s advantages, and deploy your fleets to claim and hold territory. Even diplomacy and betrayal have their place as you struggle for dominance.

Do you enjoy playing epic games with six players vying for victory? What other heavy games play best with six?