The Queen is dead! Long live the Queen! Wait, which queen? Welcome to the preview of Long Live the Queen, a dynamic two-player game of the plots required to seize the throne.

The Queen Mother has died unexpectedly, under mysterious circumstances, leaving the line of succession uncertain. Twin princesses Black Rose and White Rose both seek the throne. They arrive accompanied by an array of their skilled supporters. While either can gather the Prestige needed to win the crown by popular acclaim, sometimes it’s easier to simply eliminate the competition.

In Long Live the Queen, players secretly organize their royal courts on opposite sides of a number line from 2 to 12. On each turn, a player rolls two dice to determine which characters to reveal or activate. The active player can then swap two adjacent characters, maneuvering them into position.

A princess can win the crown through two very different means. She can gather Prestige tokens by show of force (red), wisdom and guile (blue), or prosperity and wealth (yellow). Upon collecting three of each type, the people will raise her to the throne by popular acclaim! Of course, another way to win the crown is to make sure that there is no one else competing for it. Steel, gunpowder, and witchcraft can lead to the untimely demise of the other princess, clearing the path to the throne.

The princesses lead loyal supporters into the courtly intrigue. Three types of followers bring Prestige whenever activated. Wily Assassins and Snipers slip through the halls, a forceful reminder of power. Nobles and Schemers ply the court with wealth and secrets. Finally, the scholarly Consul, clever Witch, and quick-witted Clown meddle with the court itself, tools for a cunning princess. Additionally, the Princesses, their Guards, and shifty Cheaters bring their powerful abilities to bear but do not provide Prestige. 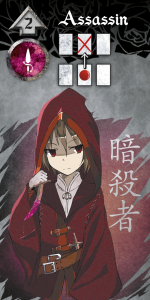 The Assassin is the most direct way to defeat the opposing princess and win the game. Using her demonstrates might, providing red Prestige. She knocks out the character facing off against her on the number line. 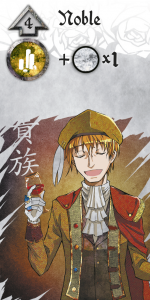 The Noble has vast resources at his disposal. His wealth always produces yellow Prestige, but he also uses it to buy an additional Prestige of his choosing. 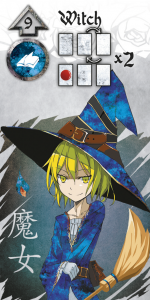 The Witch ensorcels her opponents, moving them at her whim. Her spell generates blue Prestige and allows her to move opposing characters around the court. This is often a clever way to position a princess for assassination. 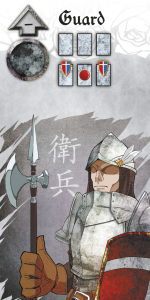 The humble Guard does not bring Prestige of his own to court. However, he protects nearby characters from assassination. Unfortunately, his dedication to the safety of others leaves himself vulnerable to attack. 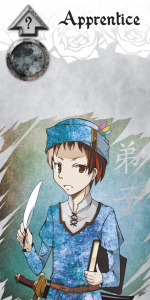 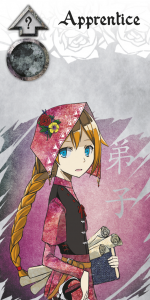 Behind the scenes of this confrontation, one character sits outside of the court. The secret master instead sends two Apprentices in their place, each with the exact same skills they would bring to the struggle. At the start of the game, players secretly choose any Prestige character to be their secret master, doubling the effectiveness of one role. As the game continues, a player can swap out the secret master, teaching the Apprentices new skills and putting the former master into play.

Perhaps the Apprentice Assassins have failed to corner the opposing princess, and it is time to gather Prestige. On the other hand, perhaps the Noble’s Apprentices have focused too much on wealth, and it is time to pursue other tactics. Shifting the secret master keeps the game dynamic, as strategies can change on the fly, and nobody is ever completely safe.

LudiCreations expects to publish Long Live the Queen in 2017. Chase down the opposing princess with your Assassin or shame her with your Prestige, and play again in about fifteen minutes.

In a future installment, we’ll take a look at a new version of the game, featuring unique dieselpunk art in a gritty criminal underground. You might even find a familiar face or two from Crisis…