Inspired by a true robbery.

Imagine for a second that you are selling your latest board game at Essen. You recruited volunteers, set up demo tables, and built up your booth. Your games are selling like cardboard hotcakes. All is well until you turn around, and your shiny new cash box is gone…

This is Steal This Game, based on a true story. 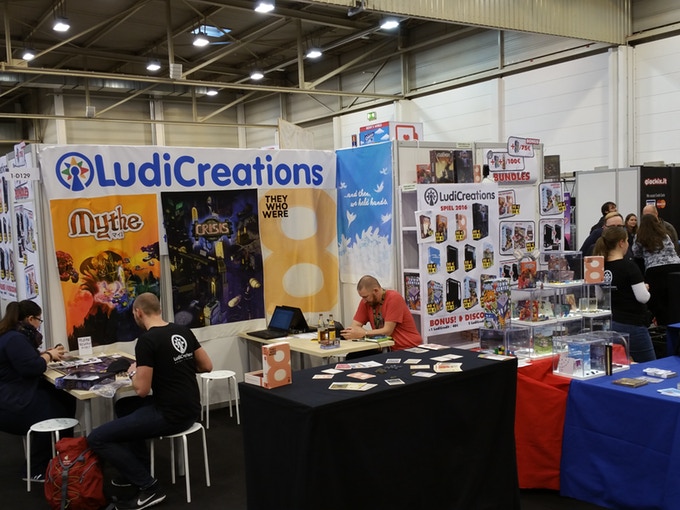 On Saturday, 15 October 2016, around 4 pm, our cashier realized that in the 10 seconds it took to look in our warehouse for a game, our cash box was gone.

For a small indie board game publisher, this represents a significant loss. Besides the financial hit, this has also affected us on an emotional level.

Games are fun. Gamers are fun. They are also some of the most welcoming, generous, and trusting people around. For this to happen during the greatest celebration of cardboard & wood in all of boardgamedom is a devastating blow.

According to what venue security told us when we submitted the police report, this is likely the work of professionals. Fellow friendly publishers have indicated that they noticed similar attempts or approaches by individuals that did not seem to know much about the hobby. We hope and assume that this was not done by any gamer.

And so, we decided to do something about it. Over the course of a single night, David Turczi designed and a whole team prototyped, playtested and printed a complete game. The next morning, the last day of SPIEL 2016, we welcomed to our booth a who’s who of boardgamedom, from reviewers to editors to graphic designers, who helped us finish it, and put it on Kickstarter.

The rest is history. And a monumental example of the grace and generosity of the boardgaming community. We could not be more thankful for the support and love shown by thousands of board game fans who were upset that this could happen, but happy that they could do something about it.

A few months later, with some illustration by the lovely The Mico and Katalin Nimmerfroh, we managed to produce and send the finished game. By that time, the game had tripled in surface area, and it became the folded postcard that is Steal This Game!

This asymmetric nanogame, playable by two players in five minutes or less, fits on a postcard (with two dice supplied by the players). One player takes on the role of a boardgame publisher at a big convention.

The other player is a thief, intent on robbing the publisher’s booth — rolling dice, lying, guessing, and shuffling cards.

The exhibitor tries to keep the cash hidden in one of the four cash boxes. The thief secretly rolls a pair of dice and then tries to make increasingly risky moves in order to gain more information about the location of the cash.

You can download the Steal This Game print-n-play version here (right-click and save to your desktop for the best view):

There are no reviews yet.

Be the first to review “Steal This Game” Click here to cancel reply.