An expansion for Alban Viard’s Town Center.
In Town Center, players build a city – in particular, the town center. They add cubes on their personal board and try to arrange them as best as possible in order to score the most victory points. Each cube represents a different type of module. Flats, shops, offices, generators, lifts, car parks, town hall can be built and stacked during the course of the game. Each module generates influence on adjacent land and on cubes directly below or above.

The Town Center: Beaune / Turku expansion contains 4 double-sided player boards, with each one having Beaune on one side, and Turku on the other. There’s also an A5-sized rulesheet/cover that explains the special rules of each map.

The expansion is a very personal project, as those two cities are the home base for the designer and the publisher, respectively.

As Beaune is a walled town surrounded by vineyards, there are no suburbs. Also, the “elevator” black cubes must be built in the center. We’re guessing that’s because in many medieval towns, no building was allowed to be taller than the church, but who knows, the designer works in mysterious ways! 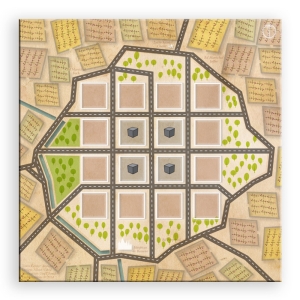 The Turku map has two seasons, summer and winter, alternating between odd- and even-numbered turns. During the summer, the two halves are considered separate, and during the winter, when the Aura river freezes, the two parts are considered one city – which allows for some clever play, such as building green cubes “next” to green cubes in the summer, when they are not considered adjacent, only for them to be joined in the winter. 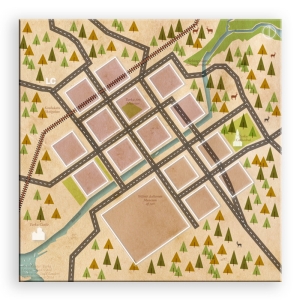 NOTE: Due to a production error, this expansion ships with the Essen / SPIEL rulesheet. We are also including the corrected sheet in each package.

You can download the rules here:
English (right-click and save to your desktop for the best view)